And so today we are going to discuss strange customers.  We have hopes that lessons can be learned and profited from while doing all of this.  We keep hoping that the customers are worrying always about our profitability.   Recently we received an inquiry, that I immediately confused with a firm order, for three semi-loads of plants going to a big job several states away and with about a 10 day notice.  Being a long-time optimist, I got all excited and forgot to ask the obvious questions. 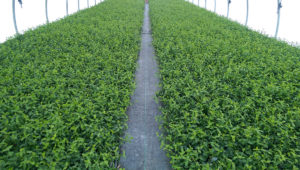 You would think that we were a bit more sophisticated than that.  Many years ago I remember someone up by Milwaukee called for a truckload of coloratus quarts, something that we were always long on, and wanted delivery in four days.  Only later did it dawn on me that they called us because their regular supplier had gotten tired of being stiffed.  We spent the rest of the summer and most of the fall trying to collect and so at the winter shows I was visiting with Peter Orum of Midwest and suggested that we trade off this customer as neither of us could afford to deal with him two years in a row.

And so I began to inquire more closely with the sales personages about this three semi-truck order.  It appears that both the architect and the installer were incompetent.  The job had been going on for seven years and by now all of the local nursery peoples had been alienated, worn out, and exhausted, which is why they were going three states away to find us.  I should have guessed better and sooner.  I was going to tell the customer that if they would notify us a year in advance we could have gotten all of the thousands of gallons of Bouteloua gracilis (Bad River Genotype) by digging our two long rows out in the field.  We have them in the field for our seed source and if we planted every seed we could find we would have the room to grow any pachysandra. 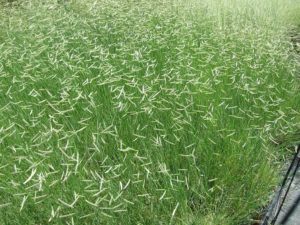 Anyhow, the customer did not give us any lead time so we had to substitute ‘Blonde Ambition’ and make a few other substitutions and then the order was lowered from three down to two semi-truck loads and it still has not been delivered.  The reader is supposed to draw several conclusions from this story—life lessons if you will—and we hope that you will draw the correct conclusions.  First of all, we will custom grow if we have enough lead time.  If we do not have enough lead time then everyone will be disappointed with the results and for no good reason at all because we will have invested all of the money and time in getting the plugs and potting up the gallons, so it is just as easy for us to leave it sit there for awhile growing happily away.  Second of all we have dealt with difficult people in the past and so our level of expectations has been sufficiently lowered so we can deal with a few more.  We can use some more business and that appears to be the kind we are most likely to get.  Much of our customer base is nice, so there is a cushion there somewhere for the other kinds of people.  The third lesson is that we have usually lots of rows of material in the fields.  If it is the right time of the year—the ground is not frozen and it is not in the middle of August—we can then dig and split and pot up.

As an example, early this spring we did 1,200 3 gallon pots of Pennisetum a. ‘Hameln’ for a customer who had just barely the time for these to root in but not enough time for them to grow.  We made really large clumps and they are not quite ready yet.  We heated and some roots are down to the bottom of the pot and in a couple of weeks the dirt will hold together.  I cannot say the same for the 7 gallon Miscanthus var. that we did for them at the same time.

Now that I have confessed to doing a lot to please our customers I might as well keep going.  Last summer we helped a landscaper by sourcing a whole bunch of native grass liner plugs.  In order to get enough we had to go to several suppliers with the concomitant several different plug sizes.  Besides that problem, the installation had several different growing conditions—soil and sun or shade—and so between the plug sizes and the growing conditions there was a lack of uniformity in height after the first growing season.  The customer was a municipality and so they were convinced that they had been cheated by us really slick plants people.  If they had not gotten some larger plants it would have been alright.  We are busy telling them that the plant varieties are correct while trying to educate them about plant growing—it is best to wait two growing seasons to achieve uniform maturity. 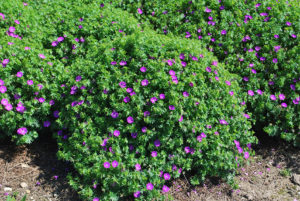 And so that is what is happening in our plant growing world.  We are always trying to get long rows of stock plants out in our fields so we will have enough cuttings or sometimes, as with geraniums, root cuttings, or splits or eyes and dormant eyes as in hostas to support our sales.  When we get this done we will have a really big display garden and we can have open houses and food and whatever it takes to lure the customers here for a tour to see that we are a real business. 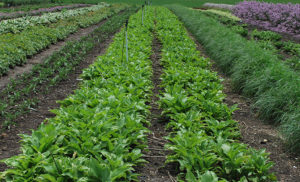 The new business model is to get licensed for as many as possible of the new patented and trademarked plants.  Then, we want to get whatever new hot native plants that are out there and I will forgo my rule of never having a plant on the premises that I cannot pronounce.  And we will want to have all of the old standbys such as daylilies and hostas and irises.  When it is all done we will have enough field grown material to support several times our expected production just in case something really hits.