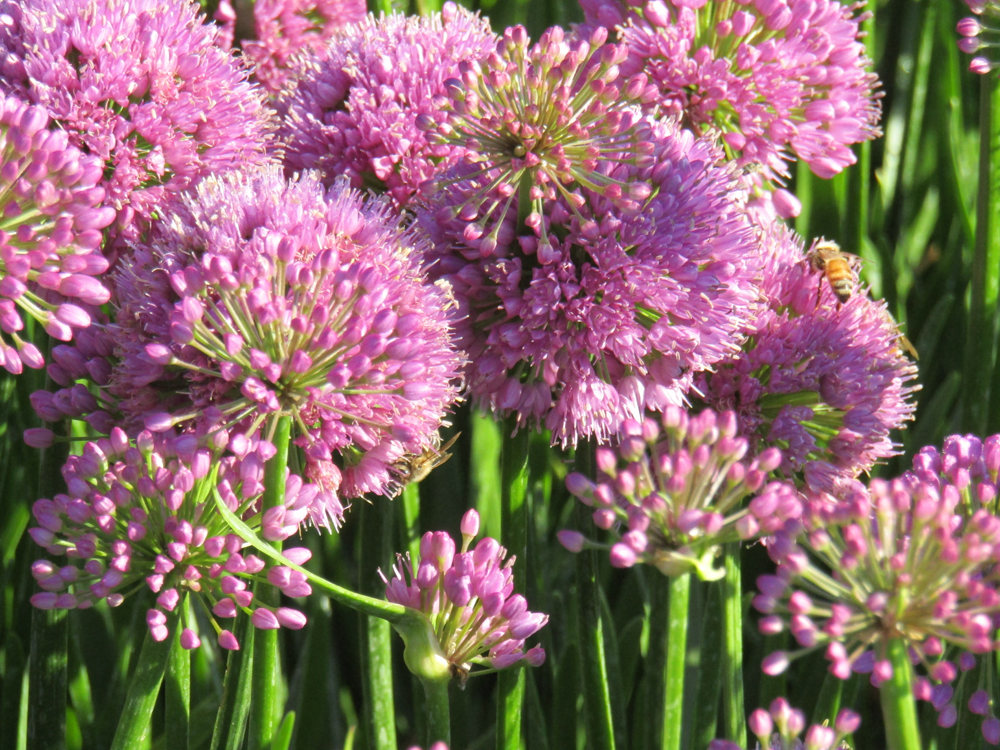 And so today I went out on a limb and asked the sales personages what I should push in my next blog.  Things did not get off to a good start because, by way of introduction, I just said that I was going to write another blog.  I did not think that “good grief” and “heaven help us” were the appropriate responses.  Then I asked what I should push.  That started another discussion about whether or not my mentioning something in the blog was a positive marketing procedure.  After the dust settled, they said alliums and daylilies.  The reason is because they are all in bloom now, looking dramatic, and there are lots of them.  Because of the spring weather and the shutting down of garden centers and landscapers in some states, our sales are showing a strange pattern—we are now long on some and short on others.  We assume that this will shake itself out by the end of summer.  That must account for our over-stock of some things and shortages of other things.

And then I asked the inventory people because they are the ones who are going out and looking and counting every day.  They said all kinds of Pennisetum ‘Hameln’ and some Pennisetum ‘Little Bunny’ and loads of 3 gallon something—‘Karl Foerster’ or ‘Hameln’, it is all starting to run together.  I personally prefer Pen. ‘Piglet’ PP#19,074 which is the half-sized patented version of ‘Hameln’ but we are not successful in doing the convincing.  Stranger yet we have over 3,000 Painted Fern, Athyrium ‘Pictum’ and no one ever has too many ferns.

Some years we would get all excited and grow what looks good to us and then give up on that and grow more of what the public wants.  The pachysandra market has us a little confused because we are running short of some of the paks that we grow.  For example, we grow three kinds of paks of the 32 to a tray, nominally 2 ½” plug trays: SVD plastic pot, Jiffy Peat Pot and this plug tray.  Out of nowhere there is now a hot market for pachysandra in the 32 plug tray.  This is one of those flexible plastic trays with these thermo formed round tapered plugs.  The tray is the same size as our nominal 10-20 which is really 11” x 22”.  It is easy to carry around two in each hand on the job site.  There are no little plastic pots being wind-driven around the yard and no one told us that it was going to be significantly more desirable.  It is like the other 32’s that we sell for the same amount of money—three cuttings stuck per cell—but a little less dirt volume.

We are producing for next year, and so there will be plenty then.  This reminds me of the glory years of the 1970’s and 1980’s in between recessions when we could sell anything, roots or no roots.  I was delivering some vinca to Rosemont Gardens when the late Bill Koehn wheeled by in his wheel chair (there was an accident while he was changing a U-joint on one of his trucks) and he commented that the plants looked like they were too young to be taken away from their mother.  I kept on unloading.  It was my parents who had loaded the truck; I was merely the driver.  And so, some years back then we could stick a pachysandra in June or early July and sell it in September.  Those were the good old days, as mentioned.  It appears that our fellow groundcover growers are doing such a good job of growing high quality product that we can no longer get by with these little short-cuts to prosperity.  I was thinking of writing them all a letter complaining, but that did not seem quite right or a very effective path to go down.  I suspect that it is even illegal in this over-regulated world. 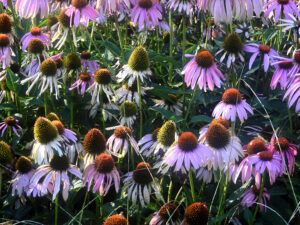 The echinaceas are all blooming and getting really tall.  Hope you can use them.  Speaking of echinaceas, Brent Horvath of Intrinsic Perennials has been making a seedling selection for some years of a tall pink echinacea with drooping petals, called E. ‘Showoff’ pink.  He has a white on also on the way.  I have no idea what the genetics are for this fine plant, but the dropping petals resemble the native plant.  Photos of this plant should be showing up somewhere.  We hire a social media person who spends all of her time doing something on the computer that we are informed is the latest thing and the most effective thing for selling things.  I have no idea what is being done.  Hope that you, the customer, are aware and being responsive.  Keep working.